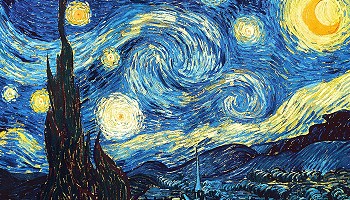 As we mentioned in article about impressionism, a piece of art that evokes more feeling in its viewers is very popular in modern times. After impressionists made revolution in art introducing a new way of seeing, many art movements evoked after and on of them was Van Gogh painting style that is generally called post-impressionism.

Though he never exhibited with them, Van Gogh was influenced by his friendship with Impressionists. After seeing their paintings in Paris, he began to use brighter colors and broken brushstrokes. However he differed from them in one important way. As he wrote in 1888, “Instead of trying to render what I see before me, I use color in a completely arbitrary way in order to express myself powerfully”.

Inner world on the canvas

Van Gogh aimed at then the inner spirituality of man and nature led to a fusion of style and content that resulted in dramatic, imaginative, rhythmic, and emotional canvases that convey far more than the mere appearance of the subject. He used an impulsive, gestural application of paint and symbolic pure colors to express subjective emotions.

Van Gogh started to use simple pure colors that had not been seen before on the canvases. Before Impressionists and Van Gogh paintings were is muted, formal, structured, and often done in strict rules to convey political and social ideas. Van Gogh was simply expressing himself, his feelings on the canvas. He was very direct, using expressive brushstrokes he was just painting, his style went far beyond conventions like perspective and so on.

Also Van Gogh tricks the views you into thinking he or she is seeing a painting of a flower, when in reality there are simple abstract brush strokes. Let’s take his Irises painting – these painting generates inside of people the impression of seeing a field of Irises while not actually using all the forms and colors of an actual purple Irises. So his job was to make people feel like they see Irises in life, to make them have that sensation.

When you walk into a room full of paintings and one of them is a Van Gogh you can tell it apart by the way it seems to hover 3 feet in front of the wall and makes the rest of the room seem almost black and white. It is a special magic about them, and everything seems moving in his paintings.

So choosing prints of Van Gogh’s works is considered a very good taste and so it is one of the best options to decorate your walls with one or two of his masterpieces.